This notebook contains the second code sample found in Chapter 6, Section 1 of Deep Learning with Python. Note that the original text features far more content, in particular further explanations and figures: in this notebook, you will only find source code and related comments. 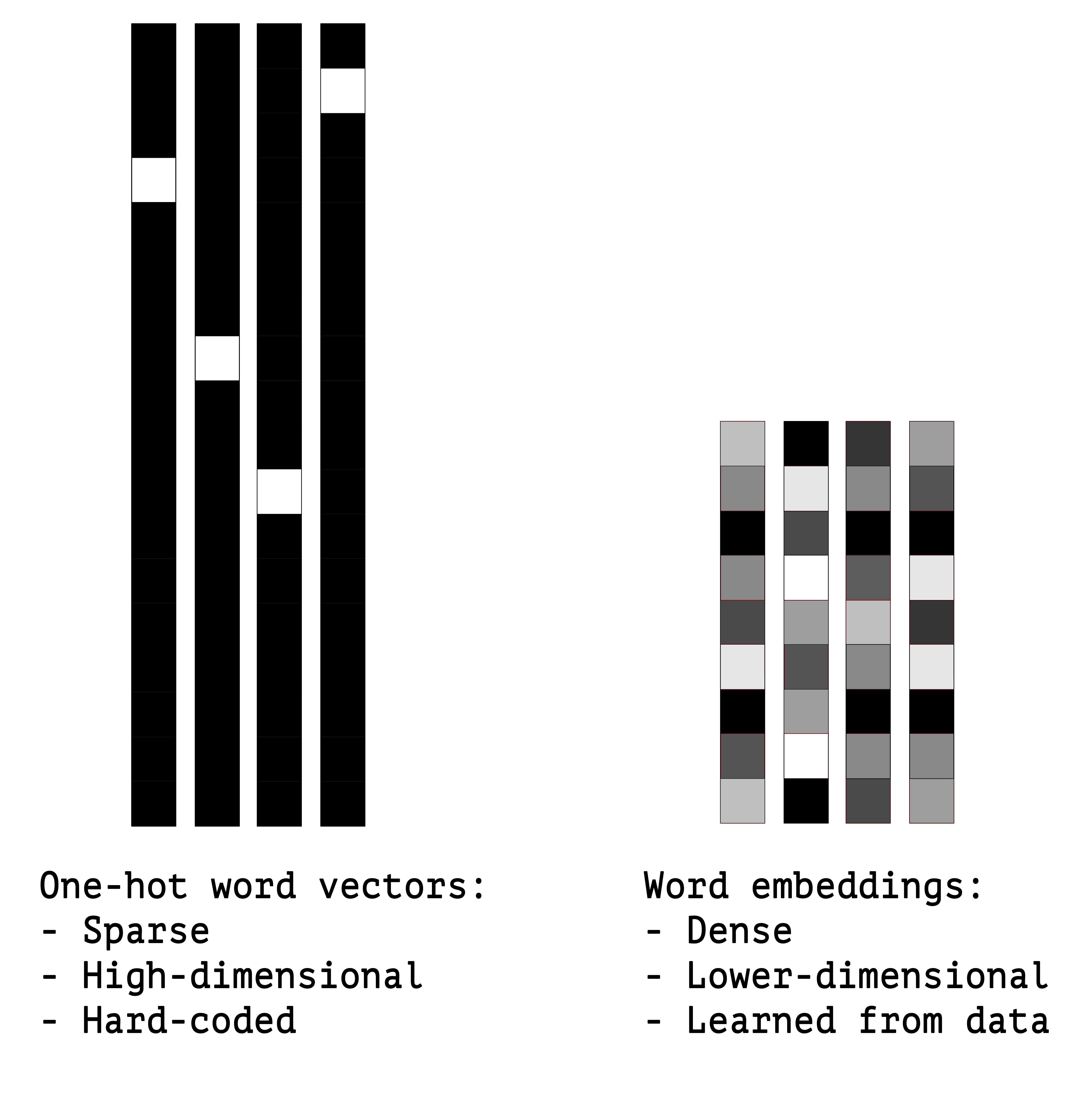 There are two ways to obtain word embeddings:

Let's take a look at both.

The simplest way to associate a dense vector to a word would be to pick the vector at random. The problem with this approach is that the resulting embedding space would have no structure: for instance, the words "accurate" and "exact" may end up with completely different embeddings, even though they are interchangeable in most sentences. It would be very difficult for a deep neural network to make sense of such a noisy, unstructured embedding space.

To get a bit more abstract: the geometric relationships between word vectors should reflect the semantic relationships between these words. Word embeddings are meant to map human language into a geometric space. For instance, in a reasonable embedding space, we would expect synonyms to be embedded into similar word vectors, and in general we would expect the geometric distance (e.g. L2 distance) between any two word vectors to relate to the semantic distance of the associated words (words meaning very different things would be embedded to points far away from each other, while related words would be closer). Even beyond mere distance, we may want specific directions in the embedding space to be meaningful.

In real-world word embedding spaces, common examples of meaningful geometric transformations are "gender vectors" and "plural vector". For instance, by adding a "female vector" to the vector "king", one obtain the vector "queen". By adding a "plural vector", one obtain "kings". Word embedding spaces typically feature thousands of such interpretable and potentially useful vectors.

Is there some "ideal" word embedding space that would perfectly map human language and could be used for any natural language processing task? Possibly, but in any case, we have yet to compute anything of the sort. Also, there isn't such a thing as "human language", there are many different languages and they are not isomorphic, as a language is the reflection of a specific culture and a specific context. But more pragmatically, what makes a good word embedding space depends heavily on your task: the perfect word embedding space for an English-language movie review sentiment analysis model may look very different from the perfect embedding space for an English-language legal document classification model, because the importance of certain semantic relationships varies from task to task.

It is thus reasonable to learn a new embedding space with every new task. Thankfully, backpropagation makes this really easy, and Keras makes it even easier. It's just about learning the weights a layer: the Embedding layer.

The Embedding layer is best understood as a dictionary mapping integer indices (which stand for specific words) to dense vectors. It takes as input integers, it looks up these integers into an internal dictionary, and it returns the associated vectors. It's effectively a dictionary lookup.

The Embedding layer takes as input a 2D tensor of integers, of shape (samples, sequence_length), where each entry is a sequence of integers. It can embed sequences of variable lengths, so for instance we could feed into our embedding layer above batches that could have shapes (32, 10) (batch of 32 sequences of length 10) or (64, 15) (batch of 64 sequences of length 15). All sequences in a batch must have the same length, though (since we need to pack them into a single tensor), so sequences that are shorter than others should be padded with zeros, and sequences that are longer should be truncated.

This layer returns a 3D floating point tensor, of shape (samples, sequence_length, embedding_dimensionality). Such a 3D tensor can then be processed by a RNN layer or a 1D convolution layer (both will be introduced in the next sections).

When you instantiate an Embedding layer, its weights (its internal dictionary of token vectors) are initially random, just like with any other layer. During training, these word vectors will be gradually adjusted via backpropagation, structuring the space into something that the downstream model can exploit. Once fully trained, your embedding space will show a lot of structure -- a kind of structure specialized for the specific problem you were training your model for.

Let's apply this idea to the IMDB movie review sentiment prediction task that you are already familiar with. With, let's quickly prepare the data. We will restrict the movie reviews to the top 10,000 most common words (like we did the first time we worked with this dataset), and cut the reviews after only 20 words. Our network will simply learn 8-dimensional embeddings for each of the 10,000 words, turn the input integer sequences (2D integer tensor) into embedded sequences (3D float tensor), flatten the tensor to 2D, and train a single Dense layer on top for classification.

We get to a validation accuracy of ~76%, which is pretty good considering that we are only look at the first 20 words in every review. But note that merely flattening the embedded sequences and training a single Dense layer on top leads to a model that treats each word in the input sequence separately, without considering inter-word relationships and structure sentence (e.g. it would likely treat both "this movie is shit" and "this movie is the shit" as being negative "reviews"). It would be much better to add recurrent layers or 1D convolutional layers on top of the embedded sequences to learn features that take into account each sequence as a whole. That's what we will focus on in the next few sections.

Sometimes, you have so little training data available that could never use your data alone to learn an appropriate task-specific embedding of your vocabulary. What to do then?

Instead of learning word embeddings jointly with the problem you want to solve, you could be loading embedding vectors from a pre-computed embedding space known to be highly structured and to exhibit useful properties -- that captures generic aspects of language structure. The rationale behind using pre-trained word embeddings in natural language processing is very much the same as for using pre-trained convnets in image classification: we don't have enough data available to learn truly powerful features on our own, but we expect the features that we need to be fairly generic, i.e. common visual features or semantic features. In this case it makes sense to reuse features learned on a different problem.

Such word embeddings are generally computed using word occurrence statistics (observations about what words co-occur in sentences or documents), using a variety of techniques, some involving neural networks, others not. The idea of a dense, low-dimensional embedding space for words, computed in an unsupervised way, was initially explored by Bengio et al. in the early 2000s, but it only started really taking off in research and industry applications after the release of one of the most famous and successful word embedding scheme: the Word2Vec algorithm, developed by Mikolov at Google in 2013. Word2Vec dimensions capture specific semantic properties, e.g. gender.

There are various pre-computed databases of word embeddings that can download and start using in a Keras Embedding layer. Word2Vec is one of them. Another popular one is called "GloVe", developed by Stanford researchers in 2014. It stands for "Global Vectors for Word Representation", and it is an embedding technique based on factorizing a matrix of word co-occurrence statistics. Its developers have made available pre-computed embeddings for millions of English tokens, obtained from Wikipedia data or from Common Crawl data.

Let's take a look at how you can get started using GloVe embeddings in a Keras model. The same method will of course be valid for Word2Vec embeddings or any other word embedding database that you can download. We will also use this example to refresh the text tokenization techniques we introduced a few paragraphs ago: we will start from raw text, and work our way up.

Putting it all together: from raw text to word embeddings¶

We will be using a model similar to the one we just went over -- embedding sentences in sequences of vectors, flattening them and training a Dense layer on top. But we will do it using pre-trained word embeddings, and instead of using the pre-tokenized IMDB data packaged in Keras, we will start from scratch, by downloading the original text data.

Now let's collect the individual training reviews into a list of strings, one string per review, and let's also collect the review labels (positive / negative) into a labels list:

Let's vectorize the texts we collected, and prepare a training and validation split. We will merely be using the concepts we introduced earlier in this section.

Because pre-trained word embeddings are meant to be particularly useful on problems where little training data is available (otherwise, task-specific embeddings are likely to outperform them), we will add the following twist: we restrict the training data to its first 200 samples. So we will be learning to classify movie reviews after looking at just 200 examples...

Head to https://nlp.stanford.edu/projects/glove/ (where you can learn more about the GloVe algorithm), and download the pre-computed embeddings from 2014 English Wikipedia. It's a 822MB zip file named glove.6B.zip, containing 100-dimensional embedding vectors for 400,000 words (or non-word tokens). Un-zip it.

Let's parse the un-zipped file (it's a txt file) to build an index mapping words (as strings) to their vector representation (as number vectors).

Now let's build an embedding matrix that we will be able to load into an Embedding layer. It must be a matrix of shape (max_words, embedding_dim), where each entry i contains the embedding_dim-dimensional vector for the word of index i in our reference word index (built during tokenization). Note that the index 0 is not supposed to stand for any word or token -- it's a placeholder.

We will be using the same model architecture as before:

Load the GloVe embeddings in the model¶

The Embedding layer has a single weight matrix: a 2D float matrix where each entry i is the word vector meant to be associated with index i. Simple enough. Let's just load the GloVe matrix we prepared into our Embedding layer, the first layer in our model:

Additionally, we freeze the embedding layer (we set its trainable attribute to False), following the same rationale as what you are already familiar with in the context of pre-trained convnet features: when parts of a model are pre-trained (like our Embedding layer), and parts are randomly initialized (like our classifier), the pre-trained parts should not be updated during training to avoid forgetting what they already know. The large gradient updated triggered by the randomly initialized layers would be very disruptive to the already learned features.

Let's compile our model and train it:

Let's plot its performance over time:

The model quickly starts overfitting, unsurprisingly given the small number of training samples. Validation accuracy has high variance for the same reason, but seems to reach high 50s.

Note that your mileage may vary: since we have so few training samples, performance is heavily dependent on which exact 200 samples we picked, and we picked them at random. If it worked really poorly for you, try picking a different random set of 200 samples, just for the sake of the exercise (in real life you don't get to pick your training data).

Validation accuracy stalls in the low 50s. So in our case, pre-trained word embeddings does outperform jointly learned embeddings. If you increase the number of training samples, this will quickly stop being the case -- try it as an exercise.

And let's load and evaluate the first model:

We get an appalling test accuracy of 54%. Working with just a handful of training samples is hard!