I would be happy to hear your comments and suggestions.
Please feel free to drop me a note via twitter, email, or google+.

A beginner's guide to Python's namespaces, scope resolution, and the LEGB rule¶

This is a short tutorial about Python's namespaces and the scope resolution for variable names using the LEGB-rule. The following sections will provide short example code blocks that should illustrate the problem followed by short explanations. You can simply read this tutorial from start to end, but I'd like to encourage you to execute the code snippets - you can either copy & paste them, or for your convenience, simply download this IPython notebook.

Introduction to namespaces and scopes¶

Roughly speaking, namespaces are just containers for mapping names to objects. As you might have already heard, everything in Python - literals, lists, dictionaries, functions, classes, etc. - is an object.
Such a "name-to-object" mapping allows us to access an object by a name that we've assigned to it. E.g., if we make a simple string assignment via a_string = "Hello string", we created a reference to the "Hello string" object, and henceforth we can access via its variable name a_string.

We can picture a namespace as a Python dictionary structure, where the dictionary keys represent the names and the dictionary values the object itself (and this is also how namespaces are currently implemented in Python), e.g.,

Now, the tricky part is that we have multiple independent namespaces in Python, and names can be reused for different namespaces (only the objects are unique, for example:

For example, everytime we call a for-loop or define a function, it will create its own namespace. Namespaces also have different levels of hierarchy (the so-called "scope"), which we will discuss in more detail in the next section.

In the section above, we have learned that namespaces can exist independently from each other and that they are structured in a certain hierarchy, which brings us to the concept of "scope". The "scope" in Python defines the "hierarchy level" in which we search namespaces for certain "name-to-object" mappings.
For example, let us consider the following code:

Here, we just defined the variable name i twice, once on the foo function.

So, how does Python know which namespace it has to search if we want to print the value of the variable i? This is where Python's LEGB-rule comes into play, which we will discuss in the next section.

If we want to print out the dictionary mapping of the global and local variables, we can use the the functions global() and local()

We have seen that multiple namespaces can exist independently from each other and that they can contain the same variable names on different hierachy levels. The "scope" defines on which hierarchy level Python searches for a particular "variable name" for its associated object. Now, the next question is: "In which order does Python search the different levels of namespaces before it finds the name-to-object' mapping?"
To answer is: It uses the LEGB-rule, which stands for

where the arrows should denote the direction of the namespace-hierarchy search order.

Note:
Namespaces can also be further nested, for example if we import modules, or if we are defining new classes. In those cases we have to use prefixes to access those nested namespaces. Let me illustrate this concept in the following code block:

(This is also why we have to be careful if we import modules via "from a_module import *", since it loads the variable names into the global namespace and could potentially overwrite already existing variable names) 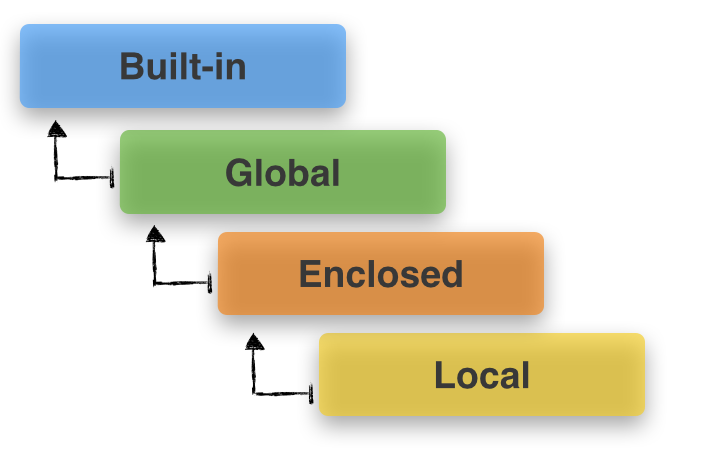 Example 1.1
As a warm-up exercise, let us first forget about the enclosed (E) and built-in (B) scopes in the LEGB rule and only take a look at LG - the local and global scopes.
What does the following code print?

We call a_func() first, which is supposed to print the value of a_var. According to the LEGB rule, the function will first look in its own local scope (L) if a_var is defined there. Since a_func() does not define its own a_var, it will look one-level above in the global scope (G) in which a_var has been defined previously.

Example 1.2
Now, let us define the variable a_var in the global and the local scope.
Can you guess what the following code will produce?

When we call a_func(), it will first look in its local scope (L) for a_var, since a_var is defined in the local scope of a_func, its assigned value local variable is printed. Note that this doesn't affect the global variable, which is in a different scope.

However, it is also possible to modify the global by, e.g., re-assigning a new value to it if we use the global keyword as the following example will illustrate:

But we have to be careful about the order: it is easy to raise an UnboundLocalError if we don't explicitly tell Python that we want to use the global scope and try to modify a variable's value (remember, the right side of an assignment operation is executed first):

Now, let us introduce the concept of the enclosed (E) scope. Following the order "Local -> Enclosed -> Global", can you guess what the following code will print?

Let us quickly recapitulate what we just did: We called outer(), which defined the variable a_var locally (next to an existing a_var in the global scope). Next, the outer() function called inner(), which in turn defined a variable with of name a_var as well. The print() function inside inner() searched in the local scope first (L->E) before it went up in the scope hierarchy, and therefore it printed the value that was assigned in the local scope.

Similar to the concept of the global keyword, which we have seen in the section above, we can use the keyword nonlocal inside the inner function to explicitly access a variable from the outer (enclosed) scope in order to modify its value.
Note that the nonlocal keyword was added in Python 3.x and is not implemented in Python 2.x (yet).

To wrap up the LEGB rule, let us come to the built-in scope. Here, we will define our "own" length-funcion, which happens to bear the same name as the in-built len() function. What outcome do you excpect if we'd execute the following code?

Since the exact same names can be used to map names to different objects - as long as the names are in different name spaces - there is no problem of reusing the name len to define our own length function (this is just for demonstration pruposes, it is NOT recommended). As we go up in Python's L -> E -> G -> B hierarchy, the function a_func() finds len() already in the global scope (G) first before it attempts to search the built-in (B) namespace.

Now, after we went through a couple of exercises, let us quickly check where we are. So, one more time: What would the following code print out?

I hope this short tutorial was helpful to understand the basic concept of Python's scope resolution order using the LEGB rule. I want to encourage you (as a little self-assessment exercise) to look at the code snippets again tomorrow and check if you can correctly predict all their outcomes.

In practice, it is usually a bad idea to modify global variables inside the function scope, since it often be the cause of confusion and weird errors that are hard to debug.
If you want to modify a global variable via a function, it is recommended to pass it as an argument and reassign the return-value.
For example:

In order to prevent you from unintentional spoilers, I have written the solutions in binary format. In order to display the character representation, you just need to execute the following lines of code:

In contrast to some other programming languages, for-loops will use the scope they exist in and leave their defined loop-variable behind.

This also applies if we explicitly defined the for-loop variable in the global namespace before! In this case it will rebind the existing variable:

However, in Python 3.x, we can use closures to prevent the for-loop variable to cut into the global namespace. Here is an example (exectuted in Python 3.4):

Why did I mention "Python 3.x"? Well, as it happens, the same code executed in Python 2.x would print:

This goes back to a change that was made in Python 3.x and is described in What’s New In Python 3.0 as follows:

"List comprehensions no longer support the syntactic form [... for var in item1, item2, ...]. Use [... for var in (item1, item2, ...)] instead. Also note that list comprehensions have different semantics: they are closer to syntactic sugar for a generator expression inside a list() constructor, and in particular the loop control variables are no longer leaked into the surrounding scope."