In the next few paragraphs I want to write about my thoughts and observation about hypergraphs.

Few days ago I decided to read a wikipedia article about hypergraphs and it was very fruitful actually.

I found out that most of my observations can be summed up by this article if read carefully.

A hypergraph is a generalization of a graph in which an edge can connect any number of vertices. Formally, a hypergraph H is a pair H = (X, E) where X is a set of elements called nodes of vertices, and E is a set of non-empty subsets of X called hyperedges or edges.

E is a subset of powerset of X minus empty set.

In a graph, edges are pairs of nodes, in hypergraphs hyperedges can contain an arbitrary number of nodes.

Hypergraphs that have hyperedges of the same cardinality (number of vertices in an edge) are called k-uniform hypergraphs where k is the number of nodes per hyperedge.

An example of a hypergraph, with 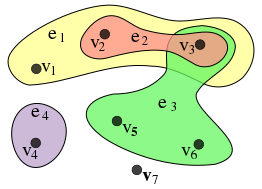 But what is this incidence structure?

The 2-section (or clique graph, representing graph, primal graph, Gaifman graph) of a hypergraph is the graph with the same vertices of the hypergraph, and edges between all pairs of vertices contained in the same hyperedge.

A hypergraph H may be represented by a bipartite graph BG as follows: the sets X and E are the partitions of BG, and (x1, e1) are connected with an edge if and only if vertex x1 is contained in edge e1 in H. Conversely, any bipartite graph with fixed parts and no unconnected nodes in the second part represents some hypergraph in the manner described above. This bipartite graph is also called incidence graph.

There is no singular notion of cycles and acyclicity for hypegraphs.

They're different from each other and in some ways counter intuitive.

Maybe I should explore them further for analysis of diffusion?

Let's imagine that I have some hypergraph.

I haven't yet probably studied what diffusion is. I've read about in my statistical phisics book, but it didn't describe whole picture. At least in my opinion.

The word diffusion is derived from the Latin word, "diffundere", which means "to spread out" (if a substance is “spreading out”, it is moving from an area of high concentration to an area of low concentration). A distinguishing feature of diffusion is that it results in mixing or mass transport, without requiring bulk motion (bulk flow). Thus, diffusion should not be confused with convection, or advection, which are other transport phenomena that utilize bulk motion to move particles from one place to another.

Okay, movement of the substance. But what substance exactly?

There are two ways to introduce the notion of diffusion: either a phenomenological approach starting with Fick's laws of diffusion and their mathematical consequences, or a physical and atomistic one, by considering the random walk of the diffusing particles.[1]

From the atomistic point of view, diffusion is considered as a result of the random walk of the diffusing particles. In molecular diffusion, the moving molecules are self-propelled by thermal energy. Random walk of small particles in suspension in a fluid was discovered in 1827 by Robert Brown. The theory of the Brownian motion and the atomistic backgrounds of diffusion were developed by Albert Einstein.[3] The concept of diffusion is typically applied to any subject matter involving random walks in ensembles of individuals.

So, my walks are implemented as random walks on markov chain. Does it make sense?

I was looking at my resources on that matter:

And this Thomas Sauerwald is a very interesting folk: http://www.cl.cam.ac.uk/~tms41/

He Sun is also cool: http://people.mpi-inf.mpg.de/~hsun

This can be relevant: http://resources.mpi-inf.mpg.de/departments/d1/teaching/ws11/SGT/index.html

This is the particular lecture:

What is in this lecture:

A very important special case is the Markov chain that corresponds to a random walk on an undirected, unweighted graph. Here, the random walk picks each step a neighbor chosen uniformly at random and moves to that neighbor. Hence, the transition matrix is